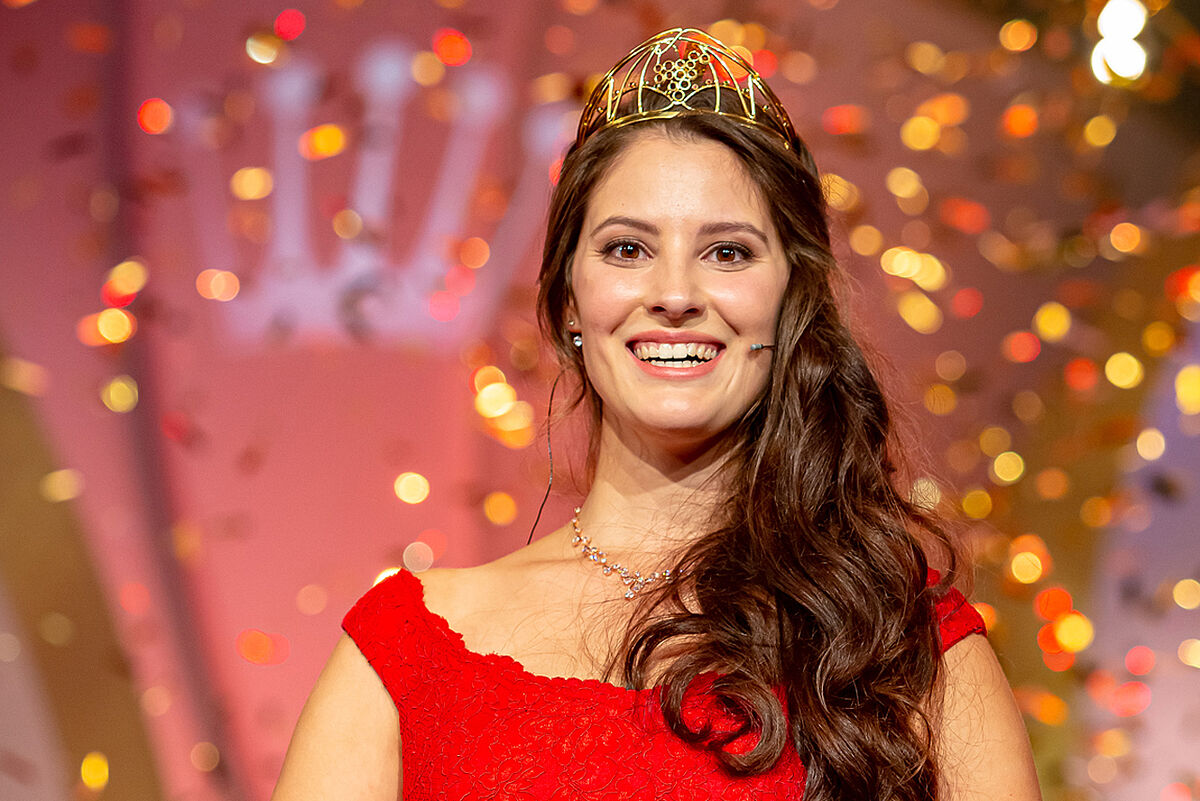 09/30/2019 – Germany’s 71st Wine Queen was elected on Friday, September 27th in the city of Neustadt – Rhineland-Palatinate. Angelina Vogt was born and raised in Baden. However, she entered the contest for the Nahe region where she lives now. Julia Sophie Böcklen from Württemberg and Carolin Hillenbrand from the Hessian Bergstraße complete the trio of the German Wine Majesties 2019/2020 in their official role as German Wine Princesses.

After an exciting live TV show, the managing director of the German Wine Institute (DWI), Monika Reule, announced the decision of the more than 70-member jury in the Saalbau in Neustadt at around 10.20 pm. With loud cheers and the applause of the 800 spectators, the three newly elected wine majesties were crowned by their predecessors whilst smiling into numerous cameras. During the preliminary competition one week before, they already prevailed with expertise knowledge, charm and eloquence.

“I am proud and happy and cannot really grasp it yet”, cheered the newly crowned Wine Queen immediately after the election, which was broadcast live on SWR television as well as via livestream on the Internet. After only two years, the highest German wine crown returns to the Nahe region.

Angelina Vogt, Julia Sophie Böcklen and Carolin Hillenbrand asserted themselves among a total of six finalists who had been selected by the jury for the finals after last Saturday’s (September 21st) preliminary round. Here, all six wine specialists demonstrated their wine related sensory, rhetorical and communicative abilities in several rounds of play. They commented on their biographical film trailers, presented an original welcome speech, passed quiz-rounds and mastered a hidden wine tasting.

Three out of six in the exciting finals

In an interim vote, the jury chose three candidates out of six who would definitely wear a German wine crown. The only question was, who one of them would it be? Thus, the remaining three had to convince the jurors with a personal speech, which should be based on a song line from their favourite song.

Angelina Vogt scored above all by her genuineness and serenity, but also with a lot of emotion.

“Angelina Vogt convinced the jury with competence, wit and her sense of humour”, Hans Joachim Fuchtel said, Parliamentary State Secretary in the Federal Ministry of Food and Agriculture and jury member. “I congratulate Mrs. Vogt and the two Wine Princesses on their election as German Wine Majesties also on behalf of Federal Minister Julia Klöckner. They have a wonderful, very important but also very responsible position”, Fuchtel emphasized.

For one year, Angelina Vogt and the two German Wine Princesses will be on tour for over 200 appointments at home and abroad on behalf of the DWI as ambassadors for German wine.